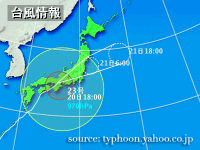 The signs are unmistakable: the End of Days is approaching.

Not only has my garden turned into a lovely little pond outpouring into a nearby river that, upon closer examination, would seem to be the road…
But simultaneously — and despite the distance I haven’t ruled out any correlation — Duran Duran has just noisily resurfaced: crushing ten years of dwindling hope that they might never be heard ever again outside of late night VH1 and supermarket PA.

One would have hoped that, in twenty years, a few prominent members of this engine of tedious musical doom would have met their timely end, but no: it seems they are all there and ready to inflict another decade of cheesy hairdo and painfully bad synthesizer music on the world. Say what you will about the drugs, at least they rid us of many a pathetic rock band over the past decades. Worst problem about New Wave era music is that coke doesn’t provide the kind of premature death by overdose in fancy hotel rooms that heroin guarantees: it merely turns rockstars in even bigger pricks with twitchy eyes. And god knows these people did not need any ego booster in the first place.

Anyway, serves me well for complaining about European weather and all the fun Japanese storms I missed while away: Tokage is going at it, Biblical style, turning the whole country into one giant rice paddy.

We considered loading two of every creature on earth into our 30-tatami flat: save the Creation, all that… But frankly, I can barely stand my fellow humans, let alone share my bathroom with hundreds of other species. My cat was of the same opinion. So instead we just stocked up on vodka, pockys, surrealist writings and back issues of Kirin Ichiban Summer Swimsuit Catalog, and will be patiently waiting out God’s wrath from the comfort of our bed.

As for the second coming and the antichrist, stay tuned: I’m told it might happen sometime next week, live on Fox News.

PS: regarding the title of this post, there’s more to it than you might think… Seems there are some godzilla fans, over at the “Typhoon Committee of the U.N. Economic and Social Commission for Asia and the Pacific”…