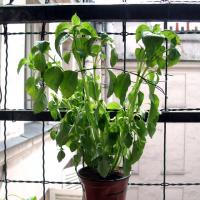 Patients #1, #2, #3 and #4 – a family – let’s call them the Lamiaceaes, were admitted in mid-April: sharing a rather small room, but healthy and showing no sign of infection. They were kept indoors and put on a steady diet of H2O, administered twice daily.

Within days following their admission, they showed signs of discomfort: all limbs progressively went numb, patients could no longer stand upright without assistance. Their health deteriorated exponentially over the course of a week. Finally, patients #1, #2 and #3 all underwent cardiac arrest, followed by acute dehydration, to be declared clinically dead on the seventh day after several failed attempts at resuscitation. Patient #4, youngest member of the family, entered a vegetative state but, in the end, miraculously survived: he emerged from his coma a few weeks later and has been making such an encouraging recovery ever since that doctors have allowed his relocation to the outdoor patio.

It was diagnosed at the time that overcrowding of their room, conjugated with possible lack of fresh air may have caused the sudden and unexpected death of all but one of the Lamiaceaes. Endemic condition or residual infection caught at their previous place of residence was not completely excluded, albeit impossible to prove and somewhat invalidated by the survival of the weakest family member.

Patient #5, whom we shall call Basil, a large-sized fully-grown adult, was admitted two days ago.

Initially showing no discernible symptoms, save for a few very small dark rashes that seemed easily accounted for by the casual outdoor lifestyle he had lead thus far. He was put on a similar twice daily H2O diet and installed outside, alongside recovering patient #4. Yesterday morning, while tending to their morning routine, the nurses alerted me to the worryingly degrading state of health of Basil. The symptoms exhibited were similar to those of the recently deceased patients: weak extremities, lack of responsiveness, difficulties standing unassisted. Temperature has been noticeably mild for the entire duration of his stay: usually in the lower 20’s C. (65 F) during the day, never under 10 C (51 F) at night. Fearing a reaction to its recent diet increase, we decided to withhold all water intake until further notice.

However, as of this morning, Basil’s health has further disintegrated to an alarmingly low level: patient is now in a semi-vegetative state, necrosis is appearing on some limbs, weakness has extended to the entire body… Judging by what we know of the previous cases and the particularly aggressive progression of the disease here, we estimate Basil has very little time left before his internal organs start shutting down one by one: a day, two at the most.

This we simply cannot accept. We cannot let Basil go at such a young and unfulfilled age, when the greater purpose of his presence here has only been merely glimpsed at.
In preparing for the worst, we have harvested and cryogenized some healthy tissues for later use in a few tomato mozzarella salads, perhaps a couple carbonara pasta even… but we still want to believe that Basil has a chance.

We, at the Herbal Diagnostic Medicine department, need your help in identifying and treating this mysterious ailment before it claims yet another innocent life.

Water seems to be at the center of the problem, but in which way? Too much? Not enough? Unrelated? Has the cat been secretly poisoning Basil?

Please help me save Basil.