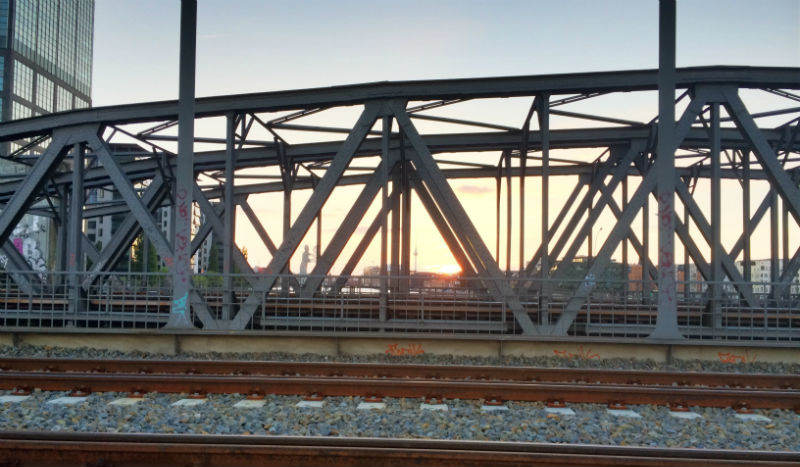 I know, I already did this title, but bear with me: I only have a limited number of topical literary references.

There might be other ways to get as violent a shock, for less than 100 euros and 90 minutes, than flying straight from the French Riviera to Berlin, but I suspect they would have to involve a taser and a few thousand volts.

Juan-les-Pins has the permanently warm weather, magnificent Van Goghian sunlight and a few breathtaking coastal sights to help temperate its insufferably posh botoxed denizens, whose main occupation involves sitting motionless (on a yacht, in a convertible, at an overpriced beachside café)…

Arm-aber-sexy Berlin just does not give a fuck what you think of its constantly gray weather or the fact that its entire public transportation infrastructure costs less than the cheapest boat in Port Vauban.

Managed expectations is a wonderful thing. Knowing better than to expect any sun in this city on a random late June week, made it all the more special when the standard rainy overcast skies cleared up for a few glorious hours of sunshine, every once in a while. Long enough to go on strolls and urban explorations with Pierre, drink champagne while following the CSD parade with little brother and his friends, have a lovely bio-brunch with Peter and Lili, soak the sunset while feasting on wine, cheese, salami and lively discussions with some of my favourite Slovaks, and sampling some of the cultural offerings of the city.

Managed expectations is also how I found myself enjoying that play at the Gorki Theatre, way more than planned. From the outset, a play in German about a Jewish-Azerbaidjani refugee girl repeatedly confronted to the loss of loved ones, just did not seem like a cheerful evening. But between a surprisingly fresh treatment, relying more on (dark) humour than levity, and some damn-good acting, I left the theatre both elated and curious about the source material. I suspect Adam was secretly disappointed by the lack of soul-crushing, suicide-inducing, Slavic pathos.

Ai Weiwei’s massive exhibit at Martin-Gropius-Bau, on the other hand, left me in a much less enthusiastic mood. This despite having really enjoyed his work, the last time I saw it in Tokyo.

The emperor of China asked his court painter, “What’s easy to paint and what’s hard to paint?” and the answer was “Dogs are difficult, demons are easy.” Quiet, low-key things like dogs in our immediate surroundings are hard to get right, but anybody can draw a demon.

Early on in the exhibit, entering the room holding his reproductions of zodiac animal heads and walking past the golden dragon head, a persistent thought in the back of my head kept bringing me back to that famous Chinese story about the difficulty of drawing mundane animals, as opposed to easy, eye-pleasing, fantastical creatures. A completely circumstantial and tangential point, since the conceptual piece had everything to do with the political significance of the animal heads and little with their artistic execution, but perhaps my subconscious’ way of telling me that it did not like the flashy, pat, on-the-nose tone of what I had seen so far.

But what really rubbed me the wrong way wasn’t (just) the largely conventional, emotionless and unchallenging tone of most of the early-exhibit pieces, but the overwhelmingly one-note political message they were very unsubtly trying to convey. A message obviously agreed upon by a rough 99.99% of all potential visitors (yes, the Chinese autocratic regime is bad, censorship is not good and Ai Weiwei is a lovely little old-grandpa that should never have been arbitrarily incarcerated for 81 days), but presented in such a obnoxious, narcissistic way that I briefly considered launching a line of Occupy Tibet t-shirts, out of sheer contrarianism. I mean, who does not enjoy their Art bashing them over the head with its point.

Anyway, I probably just wasn’t in a good mood on that afternoon.

A lovely weekend all around it was.

Thanks to everybody, Berliner and Ausberliner alike, who made that weekend The Awesome. Please do not be offended if your name and picture did not get featured in the above tidbits: our time together was no less awesome for it, I just did not have the wits (or sobriety) to get my obnoxious iPhone camera out. Beside, you probably would rather your parents did not read here the details of your wild nights out at pansexual Berliner sex clubs.

More than ever, I would consider living in Berlin again one day, provided I can figure a way to either slow my metabolism enough to sleep through the entire 6-month Winter, or share my time with a South-East Asian beach, for the sake of my vitamin D levels.

PS: finally got really sick of the old theme of this blog and switched to something new and edgy (archives should still show up with that comforting fading wallpaper of a previous theme).