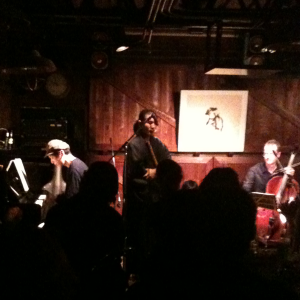 Yugao combines traditional shakuhachi, jazz piano, classical cello and tabla to make music that covers the spectrum from atmospheric folk to very energetic jazz, with a good dose of western classical in the middle.

Surprisingly, all four instruments blended together in a very natural way, with none of the gimmicky feel that sometimes come with these far-fetched collaborations. It was my first time seeing a professional shakuhachi performance live, and I was blown away by the complexity and texture of the sound that guy could get out of his flute, not to mention the obvious physical effort and precision that went into the process (as someone who could probably not even get a sound out of a pan flute, I am always amazed by wind instrument players). Hard to go wrong with tabla (although I wasn’t too crazy about the wind-chimes addition on some of the more atmospheric pieces). Cello and piano mostly played on scores apparently composed by Yoshida Koichi, the shakuhachi player, and made really solid jazz, avant-garde and whatever you can call music made with a shakuhachi, a piano, a cello and a tabla. Some of it sounded vaguely reminiscent of older Sakamoto Ryuichi pieces, but it might just be the whole cello-shakuhachi thing. Their interpretation of the sinfonia from Bach cantata BWV 156 was moving beyond words: the near-weezing haunting sound of the shakuhachi far surpassed what any oboe could ever achieve in expressing the sadness of the original piece.

You can see some of the videos from a past concert (also at Zac Baran) here and most of their tracks on their MySpace page. They also play next week at UrbanGuild and I strongly recommend you check them out!